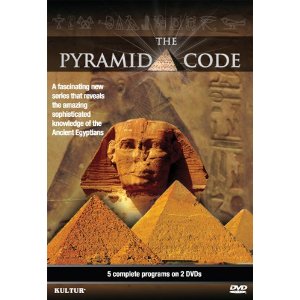 In short, the pyramids were built to conduct electricity. They are built similarly to an insolated wire, as explained in the video. The people who built the pyramids used the characteristics of the site and the materials with which they are built to generate electric currents and a magnetic field without waste. This is an elegant solution to the generation of electricity. Nicola Tesla also discovered this concept of free wireless energy.

Is this information about the pyramids and their acting as an electrical condutor true? I’m not sure, but the concept that is explored in this epoisode is awsome.

The Pyramid Code is a made-for-television documentary series of 5 episodes that explores the pyramid fields and ancient temples in Egypt as well as ancient megalithic sites around the world looking for clues to matriarchal consciousness, ancient knowledge and sophisticated technology in a Golden Age. The series is based on the extensive research done in 25 trips to Egypt and 51 other countries around the world by Dr. Carmen Boulter formerly from the Graduate Division of Educational Research at the University of Calgary in Canada.