What is a Genetically Modified Organism (GMO)?

When a gene from one organism is purposely moved to improve or change another organism in a laboratory, the result is a genetically modified organism (GMO). It is also sometimes called “transgenic” for transfer of genes.

There are different ways of moving genes to produce desirable traits. For both plants and animals, one of the more traditional ways is through selective breeding. For example, a plant with a desired trait is chosen and bred to produce more plants with the desirable trait. More recently with the advancement of technology is another technique. This technique is applied in the laboratory where genes that express the desired trait is physically moved or added to a new plant to enhance the trait in that plant. Plants produced with this technology are transgenic. Often, this process is performed on crops to produce insect or herbicide resistant plants, they are referred to as Genetically Modified Crops (GM crops).

Allergenicity. As a matter of principle, the transfer of genes from commonly allergenic foods is discouraged unless it can be demonstrated that the protein product of the transferred gene is not allergenic. While traditionally developed foods are not generally tested for allergenicity, protocols for tests for GM foods have been evaluated by the Food and Agriculture Organization of the United Nations (FAO) and WHO. No allergic effects have been found relative to GM foods currently on the market.

Gene transfer. Gene transfer from GM foods to cells of the body or to bacteria in the gastrointestinal tract would cause concern if the transferred genetic material adversely affects human health. This would be particularly relevant if antibiotic resistance genes, used in creating GMOs, were to be transferred. Although the probability of transfer is low, the use of technology without antibiotic resistance genes has been encouraged by a recent FAO/WHO expert panel.

Outcrossing. The movement of genes from GM plants into conventional crops or related species in the wild (referred to as “outcrossing”), as well as the mixing of crops derived from conventional seeds with those grown using GM crops, may have an indirect effect on food safety and food security. This risk is real, as was shown when traces of a maize type which was only approved for feed use appeared in maize products for human consumption in the United States of America. Several countries have adopted strategies to reduce mixing, including a clear separation of the fields within which GM crops and conventional crops are grown. 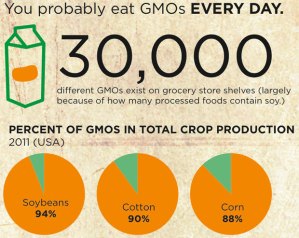 Risks to the environment

Issues of concern include: the capability of the GMO to escape and potentially introduce the engineered genes into wild populations; the persistence of the gene after the GMO has been harvested; the susceptibility of non-target organisms (e.g. insects which are not pests) to the gene product; the stability of the gene; the reduction in the spectrum of other plants including loss of biodiversity; and increased use of chemicals in agriculture. The environmental safety aspects of GM crops vary considerably according to local conditions.

Current investigations focus on: the potentially detrimental effect on beneficial insects or a faster induction of resistant insects; the potential generation of new plant pathogens; the potential detrimental consequences for plant biodiversity and wildlife, and a decreased use of the important practice of crop rotation in certain local situations; and the movement of herbicide resistance genes to other plants.

How do GMOs affect farmers?
Corporations are producing sterile terminator seeds or Genetic Use Restriction Technologies (GURTS), a class of genetic engineering technologies that produce seeds with sterile offspring. Farmers can’t use these seeds from their harvest; they will rot in the fields. Terminator seeds are a threat to the food security for 1.4 billion people who depend on the seeds from the previous year’s crops.

There is a global moratorium on terminator technology, and it has already been banned by Brazil and India. Greenpeace says it is time for Canada — a major proponent of terminator seeds — to halt this dangerous technology.

Because GMOs are novel life forms, biotechnology companies have been able to obtain patents with which to restrict their use. As a result, the companies that make GMOs now have the power to sue farmers whose fields are contaminated with GMOs, even when it is the result of inevitable drift from neighboring fields. GMOs therefore pose a serious threat to farmer sovereignty and to the national food security of any country where they are grown, including the United States.

To learn how to avoid GM foods click on the link below: